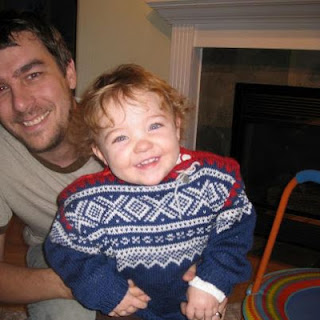 
English version for my relatives:

A little, Norwegian ski-hero
I knitted a sweater for her,  attatched a  button with «Made with love». The small ski-sweater arrived in a mailbox in Washougal, Washington last night. To Signe 1 ½  years old with the family name Spaanem. I have never met her og her parents Anne and Matt. Never seen Washougal. But I feel I know them a little bit through daily glimpses on Facebook. How did I find them? I googled «Anne Spånem» and found four of us, two in the US and two in Norway. The Americans are sisters in laws, one of them Anne, the other Anna. The world is a small place and now we’ve got Facebook.
In 1837, old pioneer Spaanem. Snowshoe Thompson himself, seven years old, made it to America holding hands with his widowed mother Gro – who had to leave his two elder siblings back in Norway because she couldn’t afford tickets for all. Jon T Rue lived in Illinois at first, but moved to California after bringing cattle there in 1857. In California he got a job as a mailman and ended up as a ski hero. The man from Tinn, Norway with a long wooden stick as a skipole, regularly crossed Sierra Nevada on his three meter long skis i all kinds of weather, with his rucksack filled with essential mail and medicines. He married a British lady,  Agnes Singleton, in 1866. That’s the closest our family will be «Downton Abbey». ( a fairly popular British series of the upper class)
By now nearly five million Americans are of Norwegian heritage. That’s about the size of us back home. When I grew up, I got to read the old letters from America and meet fourth generation American-Norwegians from «Over there» every summer. Some of them brought nylons and Wrigley’s Juicy Fruit, like it was the Marshall plan after WWII. Well, they wouldn’t know. Their  old family had come from the community in Norway with the highest proportion of migration o the US, according to population. Tinn in Telemark. On the small mountain farms back there, they almost starved to death.
But they absolutely love their heritage, like in Mt Horeb, WI:
Romegraut og lefse,Lutefisk og prim,Mt Horeb High School, team, team, team!
Signe has recentliy moved from Wisconsin to Washington. Anne Spånem and Anne Spaanem have been in touch since long before Signe was born. When I got up this morning, pictures of her were all over my Facebook-page. The sweater had arrived. It fitted her, the America –letter of our time told me. I couldn’t stop that tear.
We can hardly be called relatives, but at least – there are small ties there, knotted together by history and/or coincidence.  Both is as good.
When Signe runs around in her Norwegian ski sweater, it feels so right. The right garment for  a descendant of a Norwegian ski star on  three meter long skis .